So, I didn’t get around to watching Ready Player One in the theaters. My first experience with it was renting it on HBO via Amazon Prime. After I’d watched it (twice), I immediately went out to the store and bought the DVD. Yes, I love this movie. Not only am I amazed at the technological aspects of the animation and motion capture, but as a teen of the 80s, it’s almost a game trying to spot all of the retro references heavily sprinkled throughout the movie. I also read the book after watching the film. And while I agree with the chorus of voices complaining that the movie is nothing like the book, I get around this by imagining the two (book and movie) took place in alternate realities. Same underlying objective (save the Oasis) with vastly different paths. I just hope I get a chance to “stroll” through a virtual world like the Oasis before my time in this sphere is ended.

Many articles and videos have been written about the numerous “Easter eggs” in the film, from song choices to various fictional characters, vehicles, and objects. Some that don’t get spotted quite as commonly are Pee Wee Herman’s bike and Dr. Who’s T.A.R.D.I.S. in Aech’s work shop (along with the Eagle 5 Winnebago/spaceship from Spaceballs and Cowboy BeBop’s Swordfish which were also in the shop).

But there are a couple of mistakes that only a mildly OCD editor (such as yours truly) would notice. If you haven’t already seen the movie, you can read about the first mistake without ruining anything for you, but the second one reveals a major spoiler (although nothing really unexpected).

While trying to figure out a clue, Wade is looking at his collection of clippings about James Halliday, Ogden Morrow, and Karen Underwood. The camera pans across the clippings and pauses on a shot of Karen’s obituary pinned in front of a newspaper article. Both article and obit give the same basic info, with one minor(?) difference: 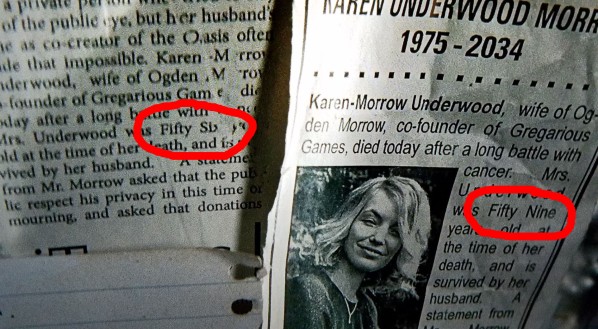 Notice the problem? The newspaper article states she was fifty-six years old when she died, while the obituary says fifty-nine. Doing the math shows the obituary to be correct. Perhaps this is a commentary on the state of journalism in 2034, or perhaps the original figure was corrected during production, and the article just wasn’t updated for this shot.

Before I move on to the next mistake (spoiler alert!), I will pause to allow for the obligatory comments about how badly I need to find a life.

Done? Good. Moving on. If you haven’t seen the movie and don’t want the ending ruined, I suggest you stop here.

Yes, I paused the movie to read the contract. Sue me (Please don’t.) We’ve already covered the fact that I need a life.

Now, if any of you legal eagles out there know of a reason why a contract executed in Ohio should be enforced under the laws of Missouri, please let me know in the comments. And in case you’re wondering, the copy that Og has outside Aech’s van has the same mistake in it as well. (Yes, I read that one too. *sigh* I need friends.)

Of course, neither of these should impact your enjoyment of the movie. Finding stuff like this is just a hobby of mine. If you know of any other text issues in the movie, please let me know in the comments. How many Easter eggs did you see, and what was your favorite? Doc Brown from Back to the Future?  John Bender from The Breakfast Club? The Flash? The Firefly class ship Daito had? (Some of my favorites.) Who or what did you see that made you point at the screen and laugh? Did anyone else notice bearded Wil Wheaton on the Back to the Future flyer in Aech’s place? How many times did you back the movie up to verify that you saw what you thought you saw?